I’ve read a few comments about Mojave being faster than HS, but I’m not sure what variables came into play for those making the comments, to make the comments!

By faster, I’m talking about preview and switching between edit pages.

Anyone recently done a direct update to Mojave and experienced any changes in RW speed?

seems unlikely. unless you switched to the new file system or did some other upgrade in the process.

mojave’s focus was on security, locking down more of the file system away from malware and accidental user mistakes.

the sandboxes got their first big overhaul since they were introduced too — but i suspect it didn’t do much to improve performance.

but a clean reinstall usually gives the impression of a speed boost while the system is perfectly clean and free of old cache files and the crud that builds up.

and btw: aside from the challenges of installing on old hardware it’s been a largely problem-free upgrade for me. i’m the world’s biggest fan of dark mode (no sarcasm here — i really truly am) — so that alone was worth the price of admission. i give it a thumbs up 👍 and say, if you’ve got the hardware then go for it, it’s mostly upside.

That was my thinking too. I did ask a few of those who made comments about speed and Mojave if it was just that, but didn’t get back a sensible reply.

aside from the challenges of installing on old hardware

i have three Mac Pros. One is a 2009 and is now totally unsupported.

My primary machine is a 2012. It’s supported, but just barely. To run Mojave you need a “Metal-compatible” video card. So I had to buy new video cards. Not too expensive, but the installation process was strange — you have to start in High Sierra with your old video card and finish in Majave with the new one. Along the way are a couple firmware updates and several minutes of black screen and extreme anxiety before it clicks over and you breath a sigh of relief that you didn’t brick your machine.

And a couple months ago, while on a junk store run with my son we happened upon another mac pro. It’s a 2010 (still supported!!!) — so i bought it for a song ($400), upgraded the video card and boom — it’s my new build server. The copy of Stacks you use today was built on that junk store find. Woo hoo! I so love getting a bit more life out of other people’s cast offs. 😄 🗑 ❤️

Would love to get my g5 (think it’s a g5) Pro up and running, but fear it’s long since dead in Apples eyes. 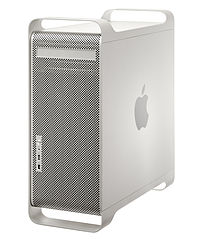 The Power Mac G5 is a series of personal computers designed, manufactured, and sold by Apple Computer, Inc. from 2003 to 2006 as part of the Power Mac series. When introduced, it was the most powerful computer in Apple's Macintosh lineup, and was marketed by the company as the world's first 64-bit desktop computer. It was also the first desktop computer from Apple to use an anodized aluminum alloy enclosure, and one of only three computers in Apple’s lineup to utilize the PowerPC 970 CPU, th

A stunning piece of industrial art. What I love most about it is you can run it with the thr side door off, and apple even shipped it with a perspex cover, so even without the door thr dust didn’t get in.

I’ve a few g5 imacs in my store, power supply gone in all of them.

I’m not sure what the last Mac OS X version that runs on pre-Intel machines is – but it would probably be a fun time capsule of 15 years ago to play with.

I think installing an older version of Linux on it might be another interesting project. You could then use it as a media server, NAS, or even an in-house web server.

But I think anything will have to be a labor of love – it’s going to take work to do make it do the same things that a $150 Chromebook can do without working up a sweat.

have you seen this one?