Thought I’d share this with the other Uikit3 users, it’s my main website business site, Caffeine Injection. Previously using Foundry as the base, now with Uikit3 at its core, along with a healthy smattering of Big White Duck stacks. 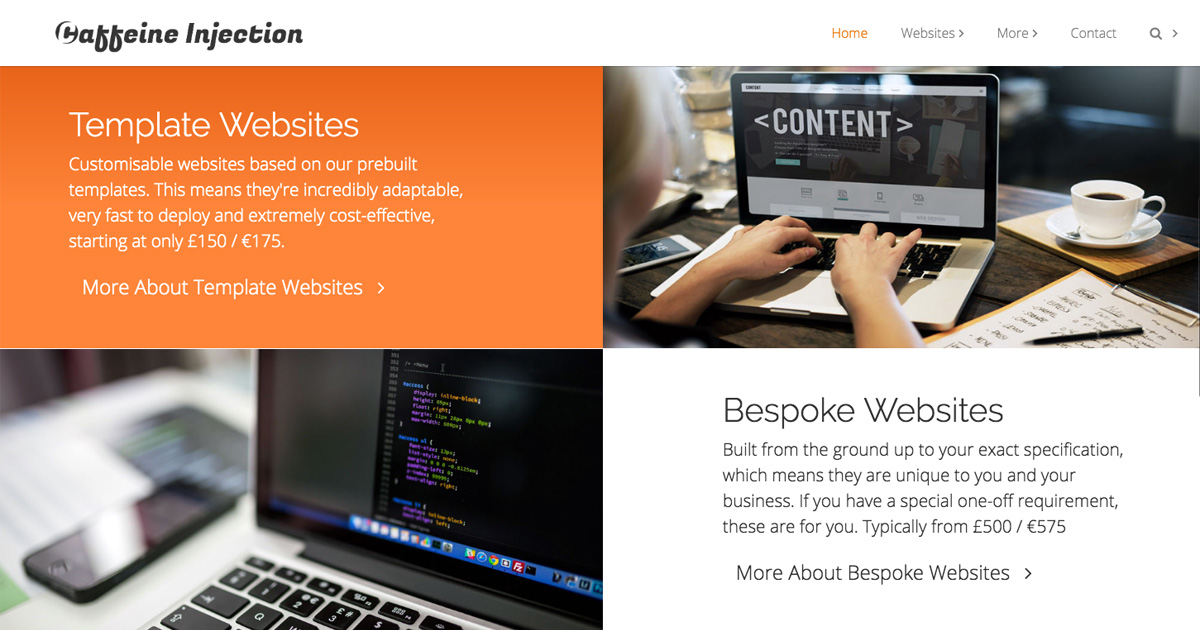 Websites Made In Northern Ireland

As with all my sites UIkit3 has been pushed in different directions with plenty of custom CSS so some elements don’t behave as a UIkit user might expect.

Previously the site was one big project, totally about 4000 files, which as you can imagine meant a full publish took forever!

This time around I’ve split the site over two projects… The “main site” at about 300 files and then the other bit, at about 3000 files. The reason for this is because 90% of edits take place on the “main site” so it makes sense to keep the size of this project as small as possible. The other bit is updated rarely, so the size and publish times are that important.

I’m being a bit coy about the parts of the site in each project as I’m curious to see if anyone can spot them. Hopefully not! If anyone can spot it, leave a comment! There are some pretty big clues that giveaway which page is in which project, but I’m hoping the transition between the two projects is pretty seamless.

Should add, there is still a lot of tuning to do on some sections and pages, which will get done at some point, but I needed to get this update out the door to get on with paying work!

I just perused most of the site using my phone- it’s outstanding! Everything looks fantastic, your message is spot-on, and it loads fast. Oh, and the menu is so much nicer than he one that comes with Foundation (what is it?). It works like a menu should work on mobile devices. 😄

The menu is a real mixture, there is actually three in total. The regular NavBar, the Off Canvas mobile stack and one I made myself.

The menu system has been the hardest part of the site, it’s taken hours to get it right, but I’m finally happy with it. Hopefully it’s pretty seamless as you move from one project to the other.

(Edited, as the post last night was a bit misleading… Tired!)

Edit: how’s your experience been with the PHPJabber scripts? Looks like you’ve got at least one in your addons. I havent had the occasion to use them yet but I’ve been tempted to buy a couple when their sales come up

Never had an issue with them. Their scripts can be a bit clunky, but in terms of functionality, it’s all there. The built in styling options are a bit pants too, but a bit of css sorts most things. I regularly use their store, hire and booking script. And I’m about to start using their accom rental script too.

Steve, which specific booking script do you use? I’m after something that could handle guided walks.

Morning Rob. In my addons section of the site I’ve a few different booking systems, most are from PHPjabbers, who make loads of them.

PHPJabber stuff is a bit clunky at times, but I’ve always found it to be rock solid. Support is excellent and they are very reasonable with customisation work. For instance, I need a cookie system added to one of the scripts (it defaults with session cookies, I need more), and they quoted €90 to add it. I had a new facility added to the store script they do, for a guy selling stuff that needs engraving: He needed a message box before checkout where the engraved message goes. They charged me €120 for that. And so on. In short, I’ve always found them really easy to work with, and pay.

Selling guides walks could be handled by a number of their scripts, depending on what you need.

By all means tell me more about your requirements and the details of the walks (regular walks each day/week at the same time, different walks, all the same walks etc.) and I’ll try to point you in the right direction.

(EDIT: I posted about the new site two years ago… Can’t believe that site is already two years old! Time for a rebuild me thinks.)

Thanks Steve. Much appreciated. I’ll message you.