Platform: release 1.1.3 has been published today

The latest improvements to Platform come thanks to the awesome input from the community. So quite a few I’s were dotted and T’s were crossed, which pushed the release number to 1.1.3.

The most important updates are:

Projects which use Columns stacks will require a review (sorry for that) because the workings underneath have been optimised and therefore changed.

The promised additions are not forgotten and will be added soon.

The 50% introductory discount for Platform is only available until June 10th, so hurry if you still want to benefit! 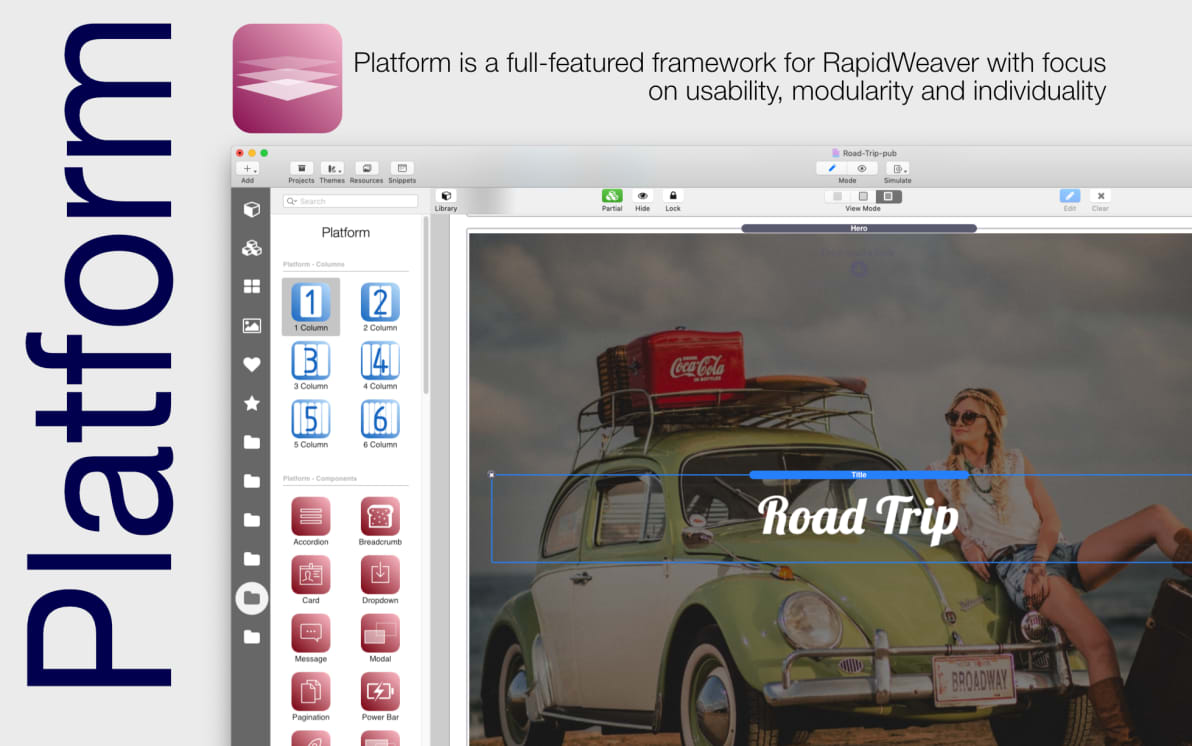 Platform is a full-featured framework for RapidWeaver with focus on usability, modularity and individuality. "Batteries included."

All sounds good! I could not find documentation about Tiles. Could you point to a relevant link or explain what they are?

Here is the link to the Tile documentation:

Thanks for the quick reply and link! Looks very interesting.

Evening @juergenbarth what’s occurring with the columns/grid stacks? Am I right in thinking you had something in the pipeline?

Hi @steveb yes, there are two things: firstly all Columns underwent changes at the core. While you might not notice this, they are now using different features from the Stacks add-on paired by a new approach to CSS which produces much cleaner CSS.
Secondly, the “height” feature now provides additional options which allow the user to select how overflow is handled.
And finally, I added Tiles. This is the Grid you were asking about. Tiles are Columns on steroids, as you can freely nest them inside of each other and create structures like the one on the Tiles page which is also available as a pre-made RW project for download.
Soon I will publish a video which explains how to use Tiles.

Tiles looks very impressive. Surprising this does not get more discussion as you are taking RW into a new area not covered with the other main frameworks. Very cool.

Not to take anything away from Platform, which I think is great, but Uikit has tiles, which I think works more or less the same, as I think both are based off the same framework, uikit. Or at least uikit is and Platform at least seems to draw some elements from it.

That good to know.

I use Foundation and Foundry so when I see great things happening with other frameworks that have features that the 2 F frameworks don’t have, it makes me realise that all the progress is being made elsewhere.

Well, Platform is not based on uikit. It is based on Bulma :-)

Yes, you have said that before, sorry. I remember when I first played with Platform it had a lot of the features that UIkit had, and used classes extensively. That’s where my confusion has come from.

it makes me realise that all the progress is being made elsewhere.

Absolutely. Foundation, whilst groundbreaking in its day now feels completely dated. I’m no coder but it feels like it’s very dated in code terms too, but I might be completely wrong there.

Foundry whilst very polished was dated the moment it was released IMO. I tried for a while to work with the Foundry stacks but gave up as most are far too rigid for me and in some instances poorly implemented.

To my mind, Platform is where it’s at now for a simple to use framework for the masses, whilst UIkit is the only real option for the serious weaver, IMO. But it does have a steep learning curve to get the most out of it, with a good understanding of classes needed too, and most weavers refuse to learn anything beyond drag & drop and ticking/unticking setting options. Which is a shame as a bit of learning gives a huge improvement in performance and control when it comes to UIkit.

EDIT: As an example of the speed, this is a site I’m presently building with UIkit, and a smattering of BWD stuff too. It’s only a single page, with not a huge amount of content, but previews in RW take about 2sec to appear. This site was previously made using Foundry (maybe Foundation, can’t recall now!) and the same BWD stacks, preview was the usual 15-30sec wait. 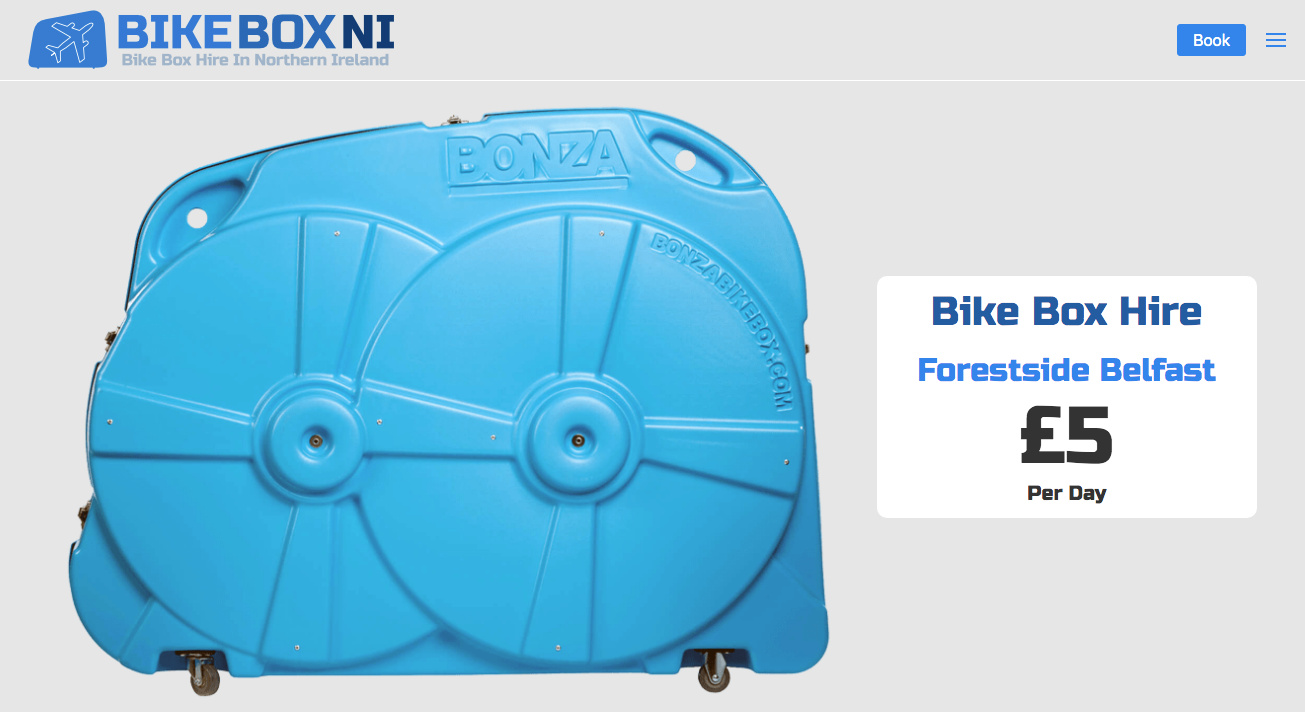 Hire a Bonza bike box in Belfast Northern Ireland for only £5 a day. Book online collect from Forestside Shopping Center.

A small point but I’ve found that exporting and publishing is way faster with UIkit than any other framework, not sure why, just is.

And sorry to @juergenbarth for banging on about UIkit on your Platform thread which I’ve just realised I’m doing! As I said, for most, Platform is the one to go for over anything else out there.

@steveb - that’s completely OK to discuss these things. Also interesting for me to read about your experiences :-)

I’m still using Foundation, but desperate to get away from it. I’ve spent so much on stacks and frameworks over the years that I’m tired of it.

I have money to spend but not sure if I’ll go the UIkit route or move over to Blocs, which I already have.

To be honest, the demos of Platform I’ve seen aren’t very inspiring. UIkit, on the other hand, looks very impressive.

Hey Neil, Platform is great, the demos don’t do it justice, you though are better at the css classes thing than I ever will be, so I’d say you’d love UIkit.

This is a demo project I started as I learnt my way around the framework: http://ci-clientservices.com/clientdev/uikit/ It uses ONLY UIkit and Stacks3 stacks. I started it just to learn UIkit but ended up making it into a project that I might sell, if UIkit3 gets traction.

It’s not finished, might never be, but it’s a good demo to see just what is possible. preview is crazy fast, typically less than 5sec for any page.

That looks cool. UIkit does look more professional than any of the other frameworks, in my opinion.

I especially like the menu options, which Foundation woefully lacks.

I’m going to have a deeper look at UIKit, cheers.

The only thing that worries me is that it doesn’t gain traction and the developer loses interest. If things aren’t profitable, they get canned unfortunately.

I’m interested to have a closer look on the combination of RW with UiKit.

Hi, good point about RCP, I’ve not tested it with uikit. I’ll add a page and test.

If there is demand I’ll make the project available for sale. I need to finish it, which won’t happen for a couple of weeks as I’m busy with other stuff, but if people want it, I’ll add some more pages, finish it and get it online and available to buy

Hi everyone,
Just wanted to chime in the discussion, about UIkit3, not trying to undermined Platform in any way, and I’m not comparing them either. Just talking about UIkit3 within the context of the question. I, like many of you, tried different frameworks for RW, but for me what sets UIkit3 apart, is the fact that the stacks are as close the elements of the UIkit3 framework as possible. It’s light and fast, and very very modular. If you visit the UIkit3 site (getuikit.com) and look at the elements of the framework, they are reproduced exactly in UIkit3. I already converted a few websites to UIkit3 (from other frameworks) and the speed improvements were significant. Also, I was able to develop the sites strictly with UIkit3 stacks! Not the case before. At some point I will post some tricks I’ve learned while using it. Another great feature of UIkit3, is the fact that @Lucas added to almost every stack the ability to give it an ID and a custom field for adding custom CSS. So, I hope that more people jump in, so that we keep the developer happy and coding.

Might be worth a mod splitting this thread and sticking the uikit stuff in the new uikit forum?