I’m as nervous as hell regarding upgrading from 8.03 to the newly released 8.1 version.

Given previous posts on other forums I’d welcome any feedback from users here who have made the ‘leap of faith’ - good or bad which I and others can use to make an informed decision.

I installed 8.1 yesterday, worked on an existing project file (site in progress) and published. I didn’t have any issues at all.

I don’t really understand why some people seem to have endless issues and others, like myself, none at all.

Full acknowledge to @Neil. I also didn’t have issues with 8.1 (beta) the last months.

It seems there are still issues for some people with remote resources location. Never got them, as I have only portable projects.

Me too @Jannis, I use portable projects, plus I warehouse everything I can.

Personally, I think 8.1 is pretty good.

Definitely do several backups of your projects before upgrading :)

Has anyone worked out why some upgrades are failing?

I’ve seen reference to the issue being linked to using remote locations for addons and projects, but given that this is a falesture supported by RW, surely it would have been tested?

I use Dropbox for projects and addons, and I’m not going near 8.1 until these issues are sorted, but does anyone with mo problems do the same, store stuff on DB?

I also use Dropbox, but only for addons. I’ve never really used the resources feature, but I recently tried it on a client site in a beta of 8.1 and it worked perfectly. If everything is stored within the project or warehoused, there shouldn’t be any issues.

I’ve never used resources, tried once but never work it out. It always seemed like a daft way to do things.

I think people have problems when you do not have a portable project, but use for example images all over your hard disk and link them into your project. With the new sandboxing approach, I guess RapidWeaver isn’t allowed fully to re-link to these images automatically, and you have to re-do this, which might fail due to various reasons.

I don’t think it is related to store project like in Dropbox or iCloud Drive.

I was going to ask how on earth you link to images in various places on your machine, then realised that it sounds a dumb thing to do so don’t actually care.

I wonder if the problems users are getting the upgrade are down to the age old problem: Dumb users?

RW has always suffered more from dumb users because it bills itself as web design for dummies.

Apple’s sandboxing requirements are strict and explicit permissions have to be given by the user for an app to interact with the file system.
The primary problem seems to be the poorly written test in the dialog, if the user picks the HD at the top of the file system then RW has permission to access all the files within it BUT the dialog states (or did in beta) to pick the folder the project is stored in (or something like that) and thus any file referenced that’s elsewhere is blocked from the proj.

Another bug that seems to be cropping up now is that referenced files that have spaces in their names and previously automatically got hyphens in their place now do not … it’s either a massive overnight or possibly sandboxing requirements prevent a users files from being renamed by an app.

The next few days as regular users who avoided the beta start using it will be … interesting.

PS there are far far to many users who don’t appear to backup, I’m guessing it’s another effect of iOS users who are used to full auto cloud backup expecting the same from MacOS.

The final 8.1 was released with no warning about 8.03 and 8.1 files being incompatible. Bugs reported on the RM forum 1 week before 8.1 was released are still present in 8.1, i.e. they were not fixed. All inexcusable really.

There continues to be very little interaction between RM and all the users reporting bugs and credit to Joe for jumping in to try to investigate the several patterns that appear in the bug reports.

Surely there is now enough reports of issues that RM can implement a professional bug investigation and find a solution, and then implement a proper beta test program and include every single user who reported a problem.

It reminds me of the time that I used to submit a great many bugs to RM, and only once was I contacted for a project file and that was the last I heard about it. The next version of RW was released and the same bug remained unfixed.

Tax bill needs paid in a matter of days (assuming RM made a profit in 17/18), they can push the bill payment to end of Feb without a fine, but beyond that they are looking at daily interest.

I suspect they just said fuck it, get it out and on the MAS in the hope the money will pour in. This sort of shit is classic behaviour at this time of year for a company with severe cashflow problems. In the last few years of the shops I’d regularly get “mistaken” invoices in during Jan, just so the supplier could get extended terms at the bank on the strength of the size of the invoice book, to cover the tax bill. In Feb credit note were issued.

I no longer have access to Companies House full reports, but I suspect RM’s returns will make interesting reading once filed and published.

That is a potential explanation that certainly makes sense.

PS I see Dan has now closed this thread https://forums.realmacsoftware.com/t/updating-to-8-1-and-now-my-site-is-gone-very-unhappy/24712/2 without any other details such as “Don’t worry we are releasing a fix soon” or “please help us with more information, etc”. I expect that thread will be hidden soon with all of the other hidden threads.

I’ve had zero problems with the 8.1 upgrade.

I warehouse most of my “stuff” (images, PDFs, etc.) with only a few images used via drag/drop. I have “copy into document” option turned on.

BTW, how does one make a project portable? (I know I’ve already done it, but I can’t for the life of me find the settings in RW8.) I store all my active projects on Dropbox. 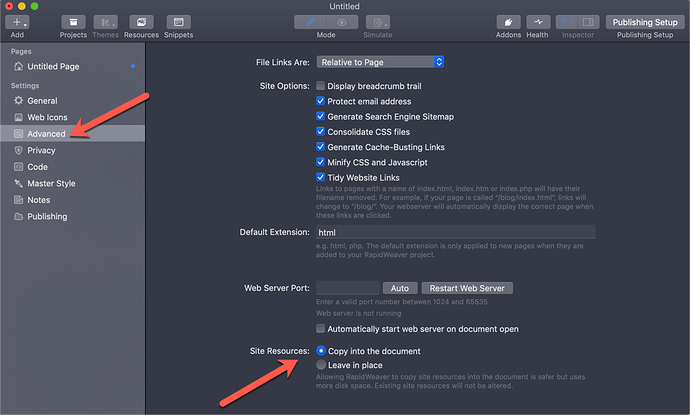 Thanks! I believe in RW7 (which is when I started making this portable) the process was a bit different. Okay, I definitely have “copy into the document” activated already.

It does seem RM needs to do a better education for folks about how to handle resources. I can only imagine some of the weird and crazy things people do. Copying into the document, along with warehousing when it involves a large number of resources (e.g. lots of images for a gallery), would solve the vast majority of the problems people are facing.

I can only imagine some of the weird and crazy things people do.

Especially if images are on external HDDs not always connected to the iMac / MacBook.

My Advanced panel looks different to that! 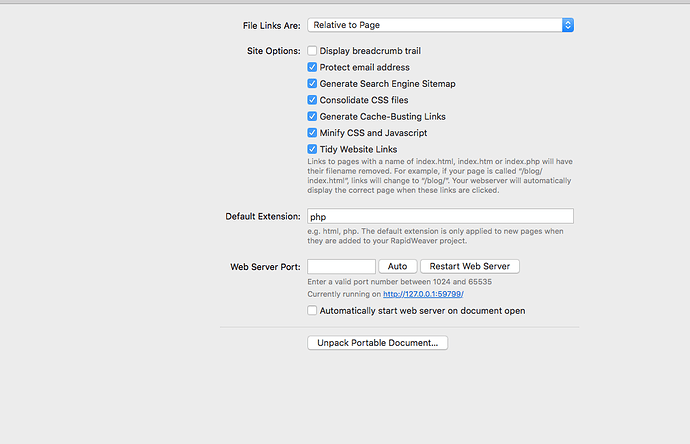