Reproducing a logo in Designer (or other)

I’m bacxk looking for help from an Affinity Designer expert.

I have a logo sent from a client, I need it rebuilt in Designer. The problem is it looks like the original was hand-drawn and so when the image gets large it really doesn’t look good. I want to reproduce it close to the original but with much “smoother” more uniformed lines, essentially I want to remove the hand-drawn appearance and give it a more modern feel. If that makes sense!

Anyone out there able to help?

In designer, you can re-create this using an oblique shaped pen tool set to the same width as the original logo was created with.

To make this process easier, use the original logo as a temporary background and fill the screen with it. Then set the pen settings and try to overdraw on top of the original logo. You may remember last doing this type of stuff when you were 5 years old.

You will need to have multiple attempts at this. Also, the success of this will depend on the clients ability to match what you do with the original logo. More than once , I have been shocked with what clients will accept as a copy of a logo. E.g. they may just want a tree-like shape and some letters in some colours. So it is usually worth finding out what exactly they want with a couple of quick demos.

Are you essentially saying freehand? Tried, the results are just not what I want.

Yes. The original would most likely have been done freehand as a vector and then exported to a bitmap image.

Ya, in which case, as I say, I’m not able to get the finish I want.

Hand draw it with 100% smoothing and fixed width and then edit the curves created with the node tool. That will get you to where you want I believe. It will need some time and effort though.

OK. I’ve tried and failed though, hence request for help.

That file looks like it was vectorised from a bitmap - there are just hundreds of nodes which is why it looks lumpy.

Just did a really dirty screenshot of the original and ran it through Super Vectorizer 2 and it has already made a better job than the original SVG with a lot fewer nodes and smoother lines. I didn’t refine any of the settings that was just a simple default so you could get it really nice very easily without artistic skill. 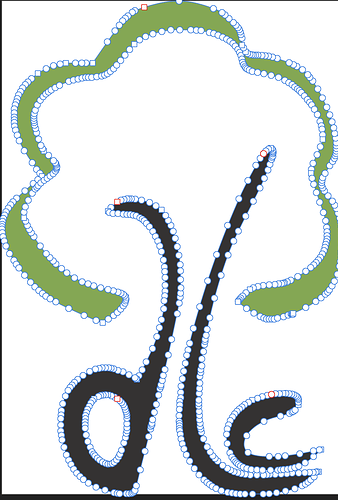 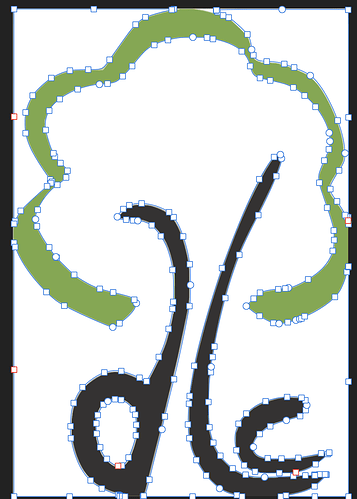 The client initially send me the original logo as a layered PDF, from that I’ve pulled out the “tree” part, then I save it as an SVG.

To go about the process you mention, where would it be best to start? With the initial PDF? Or, would I be best to save the SVG that I’ve created as png and run it thru the site mentioned?

SV2 needs a bitmap as an input so just get it at a size that is as smooth as you can in that form. My shitty screenshot above was only about 700px high so I’m sure you could get decent results with a bit bigger bitmap.

After that it is just a case of trying different settings in SV2 - just remember to wait for it to re-render after you make a change, it is not instant but it is good.

P.S. If you don’t have it I can try and do it for you later. I’ve just seen that SV2 has got a bit pricey.
I got it lifetime as part of a bundle for next to nothing.

It’s a useful little tool. Is on offer here: https://www.mightydeals.com/deal/supervectorizer2.html

Final question before I dive in… Designer won’y export as bitmap, so best option?

Had a play with SV2, it improves things, but not enough.

You you not get the node count down enough such that you can then just manually edit and delete a few in designer. The one it produced for me would be pretty simple to smooth out.

With the bitmap as a background as a guide in designer it is relatively simple to just drag the bezier handles around and create a smooth overlay of it Less noses the better - same a fonts.

@steveb, if you can send me the original PDF (I can’t open affinity files), I can redraw this for you in illustrator in a jiffy. I do this kind of thing all the time so no problem. I’ll redraw it from scratch which will give you a much cleaner result than tracing algorithms.

This one is for personal use only. You can get a lifetime license which looks like one for business use for around 40 bucks here:

I bought Super Vectorizer 2 today from Apple Store for $20.