Templates replace a long arsed way of doing things that I’ve used in my workflow since forever. This message when you try to edit a template displays a level of thought and detail you don’t often see with RW.

The difficult thing will be to explain everyone the differences between partials, externals, and templates.

If anyone can’t understand something that simple, they should not try web design.

FYI, the only stupid questions are the ones not asked.

I suspect there it’s covered a bit in the Externals video.
http://yourhead.com/stacks#videos

But here’s the cheat sheet:

Here are some other interesting details. I suspect these things will only need to be known/used by a handful of pros and devs. All this stuff can be found out by experimentation and should be “it does what you think it aught to” – so I don’t intend to document any of these. They’re just implementation details. But here are a few for you to chew on. Some of these things may be subject to fine tuning as I see how people actually use these new tools.

I was only Messing David.

And best thing: developers are able to send templates out to users by including it inside a stack. Already working on something new incorporating that feature 😽

And best thing: developers are able to send templates out to users by including it inside a stack. Already working on something new incorporating that feature 😽

I love building tools – because the real “upgrade” comes out over the following months as all the stacks with new features start appearing. I think this is going to be a big deal. I can’t wait. 😊

@isaiah I am being over cautious with this question, but what would happen if you upgraded to S4 in RW7, made some edits, tucked into the new features, saved and then had to revert back to S3 in the future?

Would you be able to open the RW file and edit it normally? Also would Externals and Templates remain in the RW file so that if you then re-upgraded to S4, that they would be accessible?

You would get a warning saying that you should not open new files with old software. It would give you a Quit button and encourage you to quit the app immediately without saving so as not to corrupt your file.

And really, the applies far beyond the likes of Stacks or RapidWeaver, it’s just a generally poor practice.

But to answer your question more specifically: Stacks 3 does not know about or understand the concept of Externals, or Site Images, or a number of the other new features.

It would give you a Quit button and encourage you to …

LOL. It does that plenty too. It even recognizes when you’re eligible for the upgrade and gives you the link to the upgrade discount. 😃

Change is always tough – especially such a big change, but I tried hard to make this one smooth. If I missed something let me know – it’s a process… constant improvement is the name of the game.

And best thing: developers are able to send templates out to users by including it inside a stack.

Distribute Templates, but as a “Super Template”. What’s a Super Template? It’s a template that doesn’t just exist across the users RW install, but is global. It’s connected to the developer much like an stack, and can be auto-updated by the dev, with updates being pushed out to the users.

Won’t this mess up the users Template library? No, cus once a Super Template is installed and clicked, it automatically creates a version of itself, but without the super power (being auto-updated by the dev). So, now the user has the Super Template on their system, that gets updated, and the regular template version, that they can turn into a partial or external and use away at.

OK @isaiah tell me why that’s a terrible idea? ;-)

@steveb - i think you’ve pretty much just described how it works right now.

every part of 3rd party stack can be upgraded, that includes bigger stuff like sub-stacks and templates.

so, as an example… if a developer decides a border should be 4px wide instead of 2px – when you update the stack you’ll see those changes wherever you’ve used the template.

but you can easily make your own copy by converting a template to an external or just unpacking it onto a page. once you start modifying it, it’s no longer a template and no longer part of the 3rd party stack or that stack’s updates. once you make a copy it’s all yours.

I think the new Template/External system is great as it is. It just takes some thought, planning and organisation to get the most out of it.

In the future, it would be the final icing on the update cake if users could add small screen shot images of the Previewed layout to Templates/Externals so users could inspect or search visually. This would be a next level improvement on the current text only descriptions.

Here is an example of the type of thing that BootstrapStudio and others do - see below: 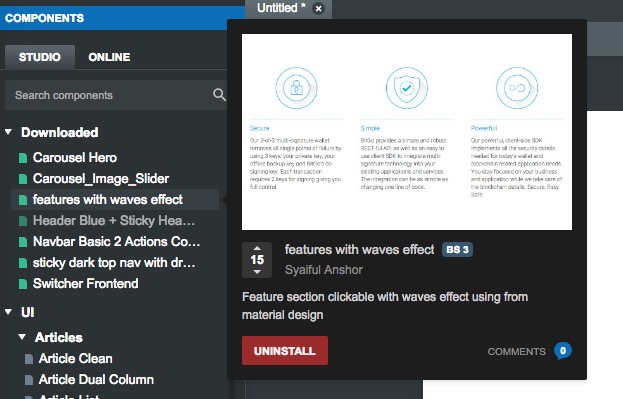 So, in the screenshot, the list under Downloaded, in Stacks, could be the Templates, and hovering over a Template would create the popover containing a screenshot of the Template, name, description and in this case Author with a link to the Author (if relevant).

I think this would take Stacks into a new area where developers could deliver demo and example Templates. Such a system could have a Help link to the stacks used or Template help page.

I think the new Template/External system is great as it is.

Just so we’re clear, in case my comments above are being perceived as otherwise, so do I. I’m just throwing out ideas.

Oh, and why has the title of this thread changed? Am I missing something? Who changed it? (Wasn’t me!)

I think it’s good to have proper titles if people search for these key words. Call it SEO work 😛