WebP image format and its lack of support by Apple

Since WebP image format supports alpha channel (transparency) and has a significant advantage over JPEG, GIF and PNG formats regarding reduced file size at a comparable image quality, supporting it should be a “no-brainer”.

Yet, Apple is consistently ignoring this superior image format – presumably, just because it is developed by Google. It is so reminiscent of Microsoft ca year 2000 refusing to adopt web standards in Internet Explorer. Are they working on developing their own web image platform?

I just revisited a Smashing Magazine article from last year, dealing with this issue. 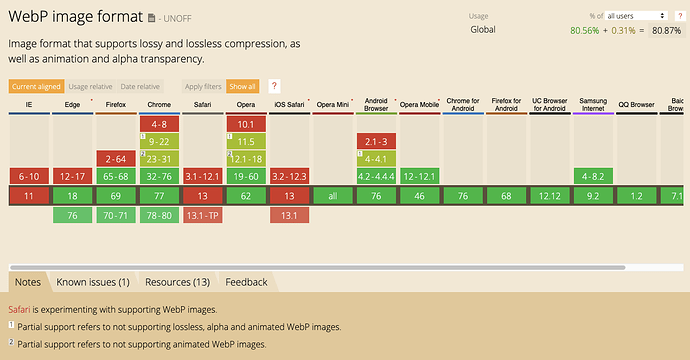 Images are a big part of the web and, yet, they can cause a lot of challenges for the user experience if not properly optimized or delivered. It’s been almost a decade since Google introduced the world to WebP as a solution to this problem. As more...

There are interesting comments to that article, as well. Especially the ones presenting snippets of code that enable a fallback to JPEG format. I know that Will offers a single image stack that supports WebP, but I wonder if this could be implemented in RW’s galleries (@Jannis @willwood @nickcates)? [Does Nick Cates have an account on this forum?]

Anyway, I went to Apple’s Safari feedback page (https://www.apple.com/feedback/safari.html) and requested implementing WebP’s support. I am not holding my breath, though.

I doubt a end user will maintain both formats on the website.

I doubt most web developers would want to bother. But some may decide it’s worthwhile. Having an option or an alternative is always good, in my opinion. Especially, when it can result in much better performance/loading speed on image-heavy pages. And especially on pages that contain lots of thumbnails for large galleries.

And then, what about HEIC format? Great image format, no browser support.

Yes, great image format. But, as far as I know, HEIC is only supported by Safari (Mac and iOS), while WebP format is supported by all major browsers, excluding Safari. So, I suppose there would be much greater use for WebP than HEIC?

HEIC even isn’t supported on Safari 😉

I will take a note.

I will take a note.