I also did post this topic over at WeaversSpace, but I know that some of you here could eventually also help me cleaning up my thoughts and plans regarding this client project…

I’m supposed to create a website for a customer, which – among many other things – should offer interested parties the possibility to book small advertising banners (logo/image and short text). The release of these ads should be done manually by my customer after checking the content of the ad. The ads would then be automatically displayed on the website after the approval as TCMS Blog Lists (no detail view needed).

The website will definitely be based on Foundation 6 and Total CMS. Now I’m not sure if I can cover all this with TCMS (in its current version) or if I might need Sitelok additionally (with which I never did work before).

It’s not clear yet if the ad-customers will be able to change their ads themselves later on. If so, these changes would also have to be approved by my customer first. Hm, this could be problematic because the ad customers would have to have their own login area (Sitelok?) to edit their ad with TCMS (possible at all?). But this (i.e. the subsequent modification of an ad by the ad customer) is perhaps a bit “too much”, isn’t it? Maybe it will be enough if the ad-customer sends wishes for changes to their ad just via email…

I also thought about using Foundation 6 Forms instead of TCMS for submitting the ad by the ad-customer to my client. In this case my client would have to copy and paste the content into TCMS by himself. Hm, but maybe that’s not a so good idea…

The payment for the ads is another issue. But I think it would be easiest if my customer would manually activate the respective ad after payment has been received (which he has to do anyway after checking the content of the ad).

Phew…, any ideas or comments on this…?

Depending on the finer points of what you need… https://www.revive-adserver.com/

You install in on your server and setup account for the advertisers. They can then add their own adverts (or you/client can do it). You set the price, based on clicks or impressions.

Next setup zones. These are the spots on the website where the adds will appear. You physically add the adverts to the zones by use of code snippets. Suspect TCMS can handle that.

Now you connect the adverts to the zones, and boom: They appear.

Advertisers can log in and view stats etc. and/or get reports automatically sent to them.

It’s a bit clunky, and the interface is not the most modern, but once setup it’s rock solid.

Some screenshots of one of my installs of it… 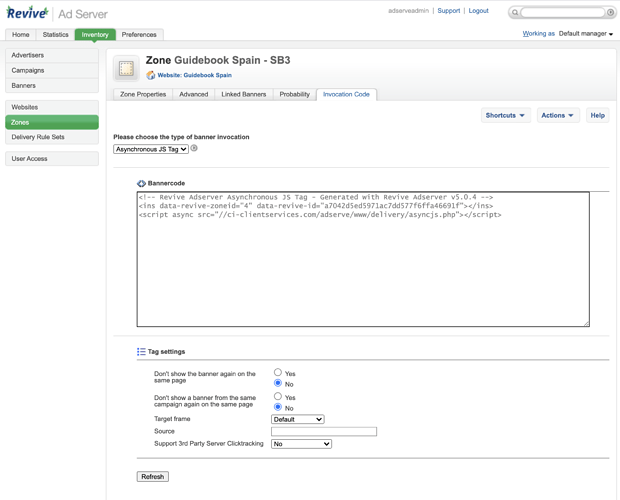 You’re correct that TCMS won’t do all this right now.

But SiteLok will allow the controls you’ve listed - including taking payment.

Based on your brief, here’s one way to use SiteLok as the control and TCMS for the content :

This is be a simplistic reply but having used SiteLok on a pretty complex members/public/subscriber ecommerce site, the cost - less than £100 including Joe’s stacks, is fantastic value. I’ve found it to be incredibly adaptable once you get your head around the core concept. And my client loves it. (Just as well as he’s happily paying me a premium for it!)

What you described sounds similar to what is called an Ad Manager in the Wordpress world, of which there are many. If you are not familiar with WP, some of these often free plugins are complete management and payment systems. You just add the plugin and then paste a short code wherever you want the ad to appear.

I know you said you were set on using TCMS and F6, but that sounds like it could be a lot of work to me, to design the system, build it, test it and train the client to use it.

I.e. this type of service - https://adcontent.pro/screenshots/

Thanks all for your answers so far. Since I definitely cannot use WordPress for this site (never did anything with WP) I think either Steves suggestion of Revive Adserver or Geoffs way to use Sitelok with TCMS will be the way I’ll be going.

@Geoff You wrote “This is be a simplistic reply”. That may be, but it already shows the general way how it could be done. Thanks for that. Although I have some questions of course regarding the details of it. But I cannot expect from you to go into such detail here, right? ;-) For example point 2: where does the ad-customer put in the text (and image) for the ad? Right into TCMS? Or will my client have to copy/paste this info from Sitelok into TCMS? Does the ad-customer create a new ad blog post or is this done by my client? And how does this play together with the (pre-defined?!?) Sitelok form fields…? Am a bit confused currently… ;-)

For example point 2: where does the ad-customer put in the text (and image) for the ad? Right into TCMS?

I think there needs to be some discipline to the data that your client’s customers enter. Otherwise is a free-for-all and totally unmanageable.

On this post-edit page, I would pre-fix the blog category but allow the customer to input their own Genre/Author tag (which can be called anything you want - “customer name” for example ).

That way your client will be able to see all new customer ads (posts) added to that category, then decide whether to show their unique “tag” on the published page.

No copy and paste, just a new tag entry on the post page. The new tags can be added using an admin macro so no republishing required.

Plus the added advantage of SiteLok and the ability to see that customer activity, send email, messages or block him/her.

You could easily test the TCMS part without the need for SiteLok.