Weird edit page behavour, anyone else see this? 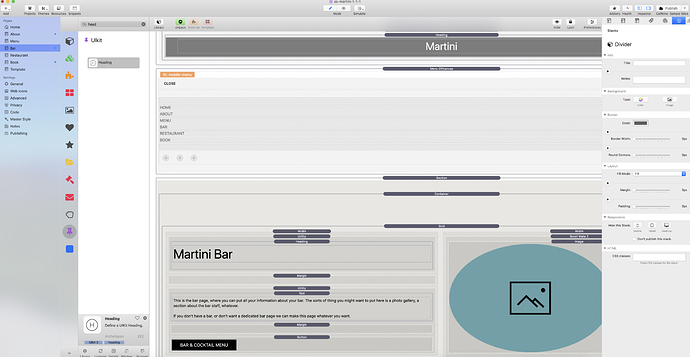 If you look at the image above, you’ll notice how all the content in edit mode is shunted off to the right, you might not be able to see it in that pic but the top of the edit area is also shunted upwards, so it’s not visible. It’s like the whole edit area have moved about 15% upwards and to the right.

I see this happening all the time. I can’t reproduce it on demand, it just happens. I’ve only seen this while working in UIkit, but it doesn’t follow that it’s a UIkit thing (it might be), it’s just I only use UIkit now so spend 90% of my RW time in it.

First off I’m wondering if anyone else sees this, regardless of theme/framework?

I use three machines regularly for RW, and see this across all of them.

To fix it I have to close the project. I don’t need to close RW.

I used to see that in S3, and have done for several years on and off, but can’t recall it recently. As you mention, a RW restart fixes it. I restart RW every 20 minutes anyway, as an ongoing precaution.

Just closing and reopening hte project fizxes it, no need to restart RW for me.

Least I know it’s not just me, although it’s only started for me since S4!

it’s very likely something else on the page. i think just using process of elimination – just starting deleting stuff from the bottom until it goes away – that would be my first attempt at deducing the problem.

Next time it happens I’ll try, but I have tried this approach in the past and it kinda feels like, once it’s happened, it’s kinda “sticky”. In that, I can reduce things down to just a single stack on the page, and it’s still happening.

What I will do going forward is whenever it happens I’ll copy the page it happens to into a test project. Perhaps over time as it happens and the pages get added to the test project something, or a particular stack, or combination of stacks, might show itself to be consistent over all pages.

+1 to Isaiah’s process of elimination, also remove any custom css of the page until you find the culprit.

my guess is that some stack is crashing the template compiler or maybe the bad HTML is only enabled when you change specific settings.

i would do two things:

basically we just need more data. so when it happens collect as much data about what you were doing, what’s on the page, what changed, etc.

the more info we have about the problem, the more we’ll be able to understand it. and hopefully eliminate it.

Will do, all of that, and post back to this thread when it happens.

I have an ongoing issue I have with really REALLY laggy performance at times. I posted a while back about it.

I thought initially it was due to the amount of stacks on the page, but it’s not, or at least it doesn’t seem so. When it occurs I used to do the usual thing of removing stacks, and sometimes it felt like I nailed it down, but then not. It always felt like once it starts, nothing bar a restart stops it, and even then it often returns.

I sent a project to someone knowledgable on such things, who had the same framework, and he suggested the same. So I wonder if that might be the root?

Perhaps as a good start point, I need to uninstall and reinstall my framework? I know that when I first installed it there were issues, as some stacks for some reason didn’t get installed. Maybe a total clean out is in order?

About the edit mode issue… it has happend to me, however, I had not filed a report yet as I was trying to figure out what the issue was. It has happened with different projects and frameworks, but normally for me, if I just completely re-start RW, and re-open the same project things are back to normal.

As for the lag, I have not experienced as described by Steve. I have noticed that sometimes, when I go to preview a page in a project, it sits there in a blank screen and goes nowhere. It has started doing this lately, after my upgrades of RW and Stacks4. However, again, I have NOT been able to nail the cause of it yet, but here is a clue, sometimes it happens when I change some variables in a stacks and the preview does not come, however, if I go back to edit mode and switch to another page (wait until it all refreshes in RW, still in edit mode), then go back to the page that did not preview, and voila, it now previews correctly, and faster!

when I go to preview a page in a project, it sits there in a blank screen and goes nowhere. It has started doing this lately,

I’ve seen this too but can’t remember which stack I was using when it happened… Will report back if it happens again, unless it’s sorted by then.