What are Affinity up to?

Affinity have been hinting for a while that they’ve got something big up their sleeve. And since they seem to have almost halted development on their other apps this year, it must be pretty huge. Anyway, whatever it is, they’re launching it tomorrow. What’s the betting it’s a web design application?

I don’t know that. But it’s what I suspect. it’ll be sold to us (attempted) hidden behind the greatest version of their apps ever. Etc.

What they want to do is to sort out the appalling load times that have got worse and not better since everyone started complaining 3 years ago.
It the same for Mac and Windows versions and only seems not to be a problem for people running very high power latest hardware.
Next year it will be 30 years since I started using DrawPlus as a replacement for Corel Draw and this is the first time I’ve ever known a Serif product get worse over time.
Rant over.

It’s true. Running on my old Macbook, I can make a cup of tea, drink it, and wash up the cup before any of their apps load.

Could be, but someone on twitter said that v2 of their apps had been ready for ages. What I find curious is that they have a big open beta programme for all of their apps, yet they seem to have paused this for months, and all their people seems to have been working on something else. Have they been testing it internally, or have they been working with a ‘non disclosure’ group of beta testers?

Maybe they’ll introduce a subscription model, uh I mean a non-subscription [wink) model but where you pay yearly for updates, that consists of some nagging popup to upgrade to the same uh… “new” software and a feature of their logo automatically getting inserted on the project you’re working on. Cool huh? Then in the next release you can switch it of. Oh and of course a new file extension! 😂

sort out the appalling load times that have got worse

Really hoping then that it’s not a new version of Publisher, which is where I spend about half my time now. I love, love, love it. On the other hand, as much as I love Designer (and detest Illustrator 2023, which I also own and have to use), it is slow as molasses to open documents up.

ALL PLATFORMS.
NO SUBSCRIPTION.

Wielding hundreds of timesaving improvements and a completely redesigned UI that will optimise your workflow, V2 is heralding in a new creative era.

I don’t really have a need for Publisher but the universal license is a pretty good deal, especially for houses like mine that have both Mac and Windows. All three apps, all three platforms (mac, windows, ipad) and currently at 40% off. Edit - and that price is worth about 3 months of Photoshop and Illustrator (as much as I like/am used to those apps)

Well that was… underwhelming. Great opportunity for those who don’t have the apps to get them, for sure. But no upgrade pricing. And a whole list of features which seem to be what the apps already do, with a few interesting but hardly important new things. Still no support for R-2-L languages, or variable fonts (which Adobe has had for a good while).

Anyone else feel that 2022 is the year of the thin upgrade? RapidWeaver Classic, Stacks 5, Affinity 2.0? Features that, in previous years, would have made a decimal release get the full integer. I understand companies need to generate some cashflow but unfortunately the present circs make it hard to justify splashing out on upgrades when what one has already works well enough. And if this is the case now, things are clearly going to get quite tough in the software business.

But no upgrade pricing.

It’s $99.00 for the entire suite. If it was any cheaper they wouldn’t have the money to keep developing the product. Honestly I don’t know how they do it for the price it is.

Volume. That’s how they can do it for the price it is. And they don‘t have much choice with the pricing — their market is individuals and small businesses who struggle with the Adobe mortgage. But I’m not blaming Affinity: I’m grateful they’re around and doing what they do. I’ll buy the upgrade for the book feature in Publisher — when I have some spare cash — which has now caught up with Indesign. Others will buy it for other features. But even though there are quite a few new features, many of which have been asked for for a while on the forums, there’s probably only one or two for most people. Some of the big things: blending (linear interpolation), surface mapping, compatibility with PhotoShop actions etc. which have been Adobe mainstays, are still not there.

Since I got an M1 iMac, my Affinity load times have been phenomenal. Even Adobe programs load quickly. Version 2 Affinity programs are even faster and a lot more capable. Publisher was the weakest of the three and they’ve sorted what were, for me, the main deficiencies – footnotes, endnotes and index. It’s almost a pity that I’ve moved a lot of my book and ebook setting to 70s technology (LaTeX)! The Affinity pricing is remarkable.

No, I don’t agree. There are a lot of new features, especially in publisher.

For anyone who may have purchased v2 of Publisher…are you seeing any issues with generating PDFs? My workflow often requires me to generate three versions: one for professional printing, one suitable for emailing and one suitable for faxing (grayscale). I’m having two issues / I reached out to Infinity last week but haven’t heard back… 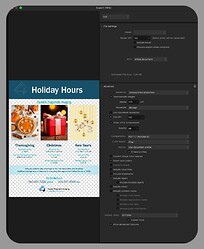 The grayscale versions are still being generated in color

The preview stays in colour but the exported document is grayscale (for me at least). And images will remain in colour in the export too unless ‘Convert image color spaces’ is selected (along with the Gray color space).

No idea about the presets. have never used them.