Where to keep Project Files

Dropbox has served me well over the years, but in common with others it seems to be causing problems of late, corrupting files and failing to synch. So, my question is, in your opinion what is the most reliable and least fiddly way of synching project files to work on multiple Macs (not at the same time obviously), iCloud, Box, or something else entirely?

I switched to OneDrive, I get 1TB per user (up to 5) with my office 365 subscription.
I’d been a DB user since 2009 but they’re in the process of (in my option) of removing sync completely, they’re doing it step by step in the hope users won’t notice but it looks inevitable to me.
OD hasn’t given me any problems and there’s nothing I really miss from DB, I’ve it running on 2 macs and 3 windows machines (1 real and 2 bootcamp’d)

I’ve been having Dropbox headaches the past couple of days too. It seems to be localized to one (possibly corrupted) RW project but I don’t now if that’s the case or if it’s just that I’ve been working on that file the most.

My DB plan is due to renew in a couple of weeks so now would be the time to switch, I suppose. Would be interested in hearing others’ suggestions on options.

Honestly DropBox is still super reliable for me in general: I do a lot more than syncing RW projects.

That said, syncing RW projects seems to work well about 85% of the time: and that’s simply not good enough. I have a new strategy that results in faster syncs. Here it is:

I work on stuff via 2 computers. This approach works just fine. If you were working on a RW project file inside of Dropbox before then that’s just asking for trouble. But still great for me (with above changes).

BTW, I do the same with iCloud.

And when RW sends a backup to your server (should you choose that option) it also zips it first.

But… Isn’t that kinda what they do? If they remove syncing, what is the point in them existing?

Interesting though that you are getting on with OneDrive. Since I stopped being a cheapskate and got my own Office account ;-) it seems I too have the same 1tb OneDrive drive thingy, so maybe time to use it instead of DB. Who I’ve had issues with for about a year now!

@paul.russam Are you syncing RW projects across machines with OneDrive?

My take on DB:
They’ve reached market saturation and are not getting many new users so to match investors expectations of more income each period they have to charge more to current users and then … lock them into DB.
The best way to lock them in is to remove all local file saving and only have your(now their) files in the cloud.
The recent update introd their own file manager, now why would you need that if you have finder/Windows explorer? Well… you’d need it if there was no local files for finder/explorer to manage.
OD is a sub product for MS and not their earner, DB IS the earner, they’ve tried diversifying with apps like Paper but I don’t see any great adoption so they’re left with milking the existing clients and then (over time) locking them in.

In retrospect, I’d say you’re on the money. I’ve never really thought too much into what DB has been up to this last year, other than to get annoyed by how complicated they’ve made everything, and how they bumped the price for giving me more space I didn’t need. Your take on it nails it I’d say.

Given the fact that I’m already paying for more than enough space on OneDrive, and that DB has not been working for the last 24hrs (maybe more, see screenshot) means today I’ll be mostly moving everything to OneDrive! 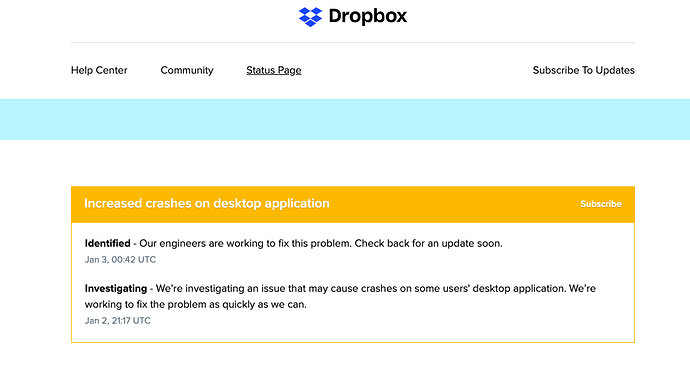 OneDrive doesn’t like thousands of my files! Having to rename loads :-(

But… It’s saying there is a naming convention inside S4S Spacer and Toggle stack which means it can’t sync it. Do you have either of these by chance?

Interesting, I had/have S4S Spacer giving me a problem. I I remember ist a file called $css or something like that.
Other than that I have nothing else causing me problems.
Ove thing I will say is that as your moving a shit load of stuff onto OD you need to give it a bit to settle down as it will be indexing like crazy. If it’s like my experience it was a good 48h before it stopped freaking out.

Yep, that’s the S4S file. I’ve pulled it for now, but will need to find a fix as I use that stack loads during the build process.

I’ve already had to restart about five times as OD keeps hanging, but with 300,000 files to sync, I’m not surprised.

Oh yea, one more thing … DONT USE ‘Files on demand’
It keeps everything on the server and downloads them to your local machine as you open them, its ok if all you work on is word doc’s etc but really fucks with anything complex. (Settings > Files on demand)

What you can do is have individual folders that dont sync to a particular machine (Settings > Account > Choose folders). I have a folder in OD that I daily copy my work stuff to as a backup BUT I have the same folder set not to sync on my Mac’s at home as I don’t need it taking up HD space.

DONT USE ‘Files on demand’

Had found that earlier, but thanks for the heads up.

OneDrive gets used as a file vault/Time Machine for Office365 file history and in-fact, file history in Word, Excel, etc… is not even enabled until an Office365 user signs up to. and uses OD. The variation of numbers of file uploads must be huge. I have seen long delays on Windows PCs when the OneDrive syncing is waiting and waiting.

Well that’s interesting. My issue isn’t the app crashing necessarily but just a constant sync cycle where it gets close to finishing but never quite does. Oddly enough, the only files that never get finished syncing are RW files (most do. Not all RW files are stalling but all stalled files are RW ones). If anything interesting comes back from the ticket I have in, I’ll share it

I’d agree with @paul.russam’s assessment as well. I deleted and re-installed the app last night and it asked me 3 or 4 times if I wanted to enable smart sync (which is the one that removes all the local files and puts them in the cloud)

Today it entirely shat itself and started leaving me loads of “invalid file” folders at the root of the DB folder. These folders are empty but DB seems to be trying to constantly sync them, so is in a perpetual loop. I’ve worked out these folders all relate to images in Resources in RW projects. I don’t do resources normally, only recently started to use it for the projects I’m selling, and I’ve worked it back and issues with DB first appeared about the same time I started them. So I’m now pretty convinced DB doesn’t like RW projects with resources.

I think I’ve actually narrowed it down more, to images added to resources directly from Unsplash, but I can’t be 100% sure on that.

So, Pauls’ comments about OneDrive have been incredible well timed for me.

So far, since this morning OD has processed 166,943 files, so about the same again to go! But it all seems to going fine, and the OD web interface is far better than DB: It’s like DB from a few years ago, before they started to try being all fancy. Plus, OD uses simple English to ask what you want to do: Store all files locally or in the cloud. DB like the muddy that question so much, I’m never quite sure what I’m doing! (WTF does “Smart Sync” mean???).

Anyway, all things being equal I should be able to close my pid for portion of DB down pretty soon, thus saving a tenner a month. I’ve got 22gb of free space on there, so plan to keep shared folders and the RW addon folder on there for now, as OD doesn’t seem to like some stacks.

Keeping the RW addons synced via DB is a good idea, I got them synced with OD but it was laborious and the S4S stack still periodically coughs up the error.

I’m fairly confident on my opinion on DB’s direction and I check their forum every so often to see what others are saying.
Here’s a 39 page thread ‘discussing’ the price/space increase https://www.dropboxforum.com/t5/Accounts-billing/Is-anyone-else-furious-at-the-upgrade-to-2TB-and-extra-60-a-year/td-p/348356
Here’s another multipage one about DB apering in the Dock https://www.dropboxforum.com/t5/Installs-integrations/Can-t-remove-Dropbox-icon-from-Mac-OS-Dock/m-p/386459 This one’s interesting as it indicates that DB want to become an app and not a service, it’s page after page of ‘how do I go back to std’

I wasn’t pissed at the price increase, per se, but was at the way they did it.

If they’d simply said “hey, we need to increase our prices, sorry, but that’s life”, I’d have been… OK, whatever, it’s only another couple of $$ a month. But no, like all good tech companies run by twats they had to go the “WOW! We’ve got some amazing new features for you AND we’re going to give to loads more space that you don’t need and we’re only charging a small price more for it”. Cus as like all good tech comp[any twats, they thought their user base we’re stupid.

Dropbox is hosted on AWS so the service should be reliable. However, I’ve never liked using Dropbox. If you have a good host with reliable backup and decent speed, I’d have thought self-hosting using SyncMate or similar might be a solution.

Not sure Syncmate works out cheaper, once you take upgrading to a new version into account, not if you want to sync over more than two devices, which I’d suggest most do.

Obviously your suggestion of Syncmate might not be price based, but once you factor in the server cost, I’d suggest it’s an expensive option.

I’ve now downgraded my DP account back to free, with 17gb of free space thanks to various deals going back over the years (mostly from new Samsung devices around the 2012-2015 era getting me free upgrades).

DP now holds a whopping 2.2gb of my files, with 60gb shifted to OneDrive, and the rest being dumped onto my archive drive as it hadn’t been looked at in over three years!

All three main machines now seem to by sync’d and good to go, although it’s been a painful experience getting it to here, what with DP constantly shatting itself and putting back files I’d just removed and OD falling over regularly and getting stuck indexing files. But, after countless restarts it all seems to be working OK.

For now, I’m having to run DP and OD, which is doubling up my memory and CPU resource usage, but hopefully, I’ll be able to get everything onto OD soon and can then turn off DB for good.

Thanks again to @paul.russam for the OD heads up and to the Op for starting this thread,

I just noticed yesterday that a large number of my files in DB are now invalid, including the RW sites I have there. I’ll contact CS. I have not tried to open those files yet.I hope I have not lost those files.